The Open University appoints a new Director in Wales

Louise Casella will join OU Cymru as their new director in the new year, with  responsibility for the University’s provision across Wales, working with key  stakeholders including the Welsh Government, HEFCW, students, employers and trade unions. Louise has extensive strategic leadership experience in higher education, having held senior leadership positions at Cardiff and Wrexham Glyndwr University, and having been a member of the Welsh Assembly Government Review of Higher Education in 2008. Louise says she’s looking forward to “building on the OU’s excellent reputation and its achievements in providing part-time distance education to people who want to learn while they earn across

The policy paper commits to working with universities to produce new regional plans as part of their new regional approach to investment, and places partnerships between universities, business, local government and the third sector as central to shapingwales’ future regional investment plan.

The Welsh Government are currently gathering feedback on the policy paper through a consultation, Unis Wales will be responding on behalf of the sector as part of our continued work in this area, and we encourage members to also respond to the consultation. 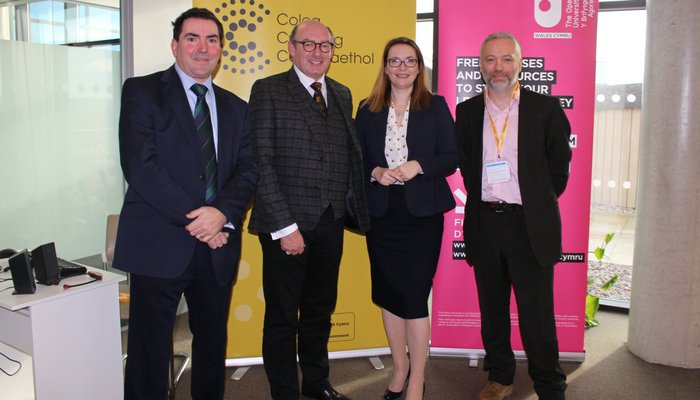 The Cabinet Secretary for Education this week launched the expansion of ‘OpenLearn Cymru’ -a partnership between the Open University in Wales and the Coleg Cymraeg Cenedlaethol, offering new courses and bilingual resources to learners. A demonstration of the value of partnerships leading innovation in Welsh education, OpenLearn Cymru will be the home of billingual, free learning in Wales.
Mentions in the media.
–Chair Julie Lydon wrote for the Western mail on the role of universities in supporting the achievement of the economic plan.
News and updates in UK higher education:
UK to stay in Erasmus until 2020
The conversation showcase:
Articles published by academics at Welsh universities this week1. Sex and relationship education should be about rights and equity not just biology
2. Wales’s schools urgently need political participation lessons
3. Reprogramming bacteria instead of killing them could be the answer to antibiotic resistance
4. Why PrEP takers should still use condoms with HIV+ partners
5.Yoga in the workplace can reduce back pain and sickness absence
6. How understanding regional rainstorms will help the world manage climate change

We wish you all a very Merry Christmas and a Happy New Year! The office will be closed from the 23rd December until the 3rd January, and this will be the last Wrap Up of 2017.

We hope you have a restful break, and we look forward to working with you again in the new year!

Universities Wales  @Unis_Wales
🌎 Universities are critical to tackling the climate emergency. Universities across the UK have signed up to our cl… https://t.co/wpNAkzzgpS
Oct 20 reply retweet favorite 4 days ago